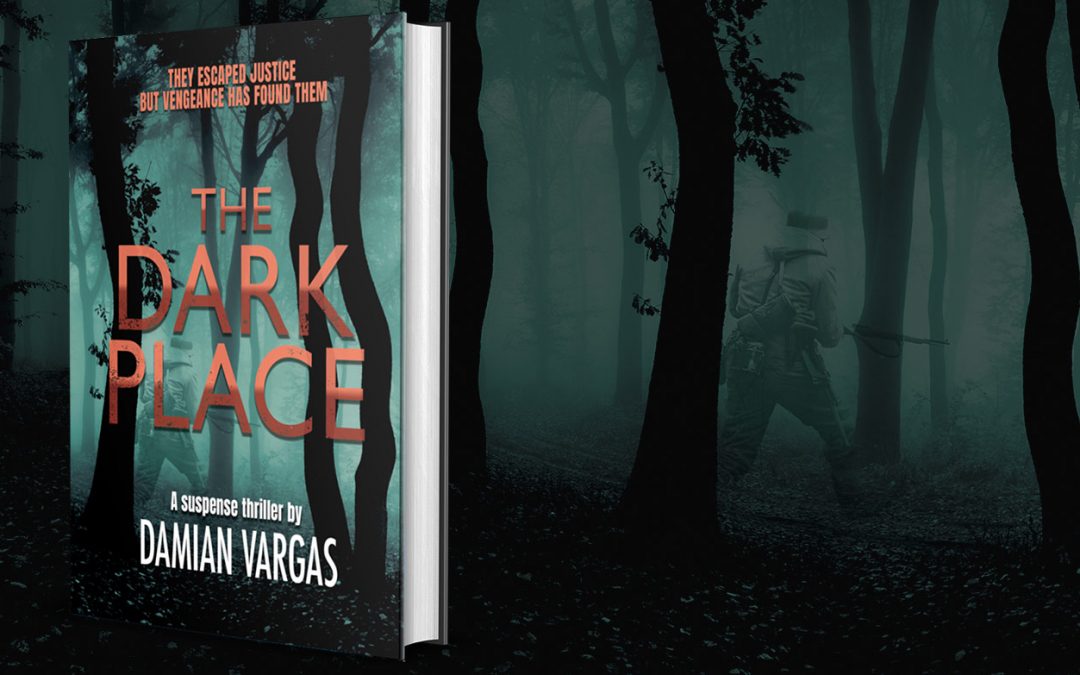 I’ve got a new book coming out called, ‘The Dark Place’. I think it’s my best work so far, but then I am rather biased. I’d love to hear from you if it sounds appealing to you.

The teaser/hooks I’m using is:

“They escaped justice in 1945, but vengeance has found them.”

The Dark Place is a historical suspense thriller and asks the question; “Are all of us capable of becoming a monster, and if so, what does it take for that to happen?”

Hollywood screenplays require what they call a ‘logline’ – a short elevator pitch to communicate the nature of the story. If this book was a screenplay, my logline would go something like this:

You can read the draft back cover blurb here, but here’s a quick taster from a synopsis I wrote:

“The novel’s historical backdrop is the small village of La Mesita Blanca, high up in a secluded valley in the south of Spain, where a community of secretive German nationals reside, protected by the Spanish state. The story, which explores our capacity for evil, is told out of sequence, moving back and forth between the memories of the main characters, and the violent events that occur on All Saints’ Day 1970, following the disappearance of a teenage boy, the son of one of the most prominent of the local Germans. Several chapters are devoted to retelling events that occurred in the village in the months leading up to the final day, and to more distant events that shaped the characters involved, and their actions prior to the story’s dark resolution.

The central protagonist is Jesus Garcia, a Captain in the Guardia Civil, a lonely widower and a man still troubled by his deeds during Spain’s bitter civil war, three decades earlier. Garcia, who is affectionally referred to as ‘the Inspector’ by his colleagues because of his likeness to an Agatha Christie character, is in his final week before retiring but finds his service extended by the regional police commissioner who makes it clear that, with President Franco and his senior ministers due to visit the region the following week, the boy must be found and those deemed guilty punished, or Garcia will face serious consequences.”

What inspired me to write The Dark Place?

I’m somewhat of a World War 2 nerd. I blame this on my grandfather, who served in Africa, France and Germany as a member of the RAF ground crew. He ended up recovering German technology from newly captured Luftwaffe bases, shipping parts of aircraft back to Farnborough and was also at Bergen-Belsen the day after it was discovered. I have some harrowing photos that he took there, and one of his stories ended up in the novel.

I once took a former girlfriend to Holland in the middle of a very cold winter, in order to traipse around Arnhem, Nijmegen, and other famous sites of Operation Market Garden and The Battle of The Bulge. Our relationship didn’t last, you might not be surprised to hear. I’ve also undertaken similar such trips to explore bunkers, museums, cemeteries, and bunkers in Dieppe, Normandy, and Berlin. On one such trip, I recovered a handful of unfired German rifle rounds from a fresh dig site.

The post-war legacy in Europe has also always fascinated me. The Cold War was one (huge) part of that, but in particular, I was always intrigued by how so many thousands of senior Nazi officials and other war criminals melted back into society, most never paying for the crimes. When I moved to Spain several years ago, I read much about the Spanish Civil War and the role the Germans played in it, but then also discovered how so many high-ranking Germans and wanted Nazi war criminals had sought sanctuary in Spain after the war. Seventy-five years later, they are no longer around, but what must have it have been like in the decades after WW2? What influence did they exert? Who protected them, and what dark ambitions were they working to achieve?

A real-life encounter with a witness to those times, and the realization that I live not far from a village where many of these people lived and thrived, sparked my imagination, and The Dark Place was born. Known as ‘The Owl’ by his Spanish neighbors because, “He sees everything”, Garcia is a Captain in the Guardia Civil, Spain’s military police force, and veteran of the Spanish civil war in which he fought as one of General Franco’s foot soldiers.

He has served as a policeman for thirty years and is due to retire. A widower, he is a wily individual who can see straight through the facades of others, and who realized as a young man that in Franco’s Spain, one must learn to “bend like the wind” in order to survive. It was a philosophy that enabled him to navigate life’s many challenges, but one which also left him with troubling memories that forever haunt him.

Garcia is looking forward to his imminent retirement when he receives a phone call in the middle of the night from the Commissioner of Police in Andalusia, telling him of the disappearance of 15-year-old Conrad Navarro and ordering him to resolve the problem quickly. Garcia knows from the moment he places down the receiver, that all he has worked for – and more – is in jeopardy if he fails to find the boy. But more than that, he must also protect his village’s dark secrets. A British businessman who recently sold his company in England – a rushed decision that took his colleagues and advisors by surprise – and purchased a dilapidated rural property in the remote Spanish pueblo of La Mesita Blanco.

A highly decorated veteran of the Second World War, Blackman had been demobbed in December 1945 after leading a specialist team of commandos on a hunt for senior German officials, soldiers, engineers, and scientists.

His greatest regret: the escape from prosecution by SS Oberführer Joachim von Ziegler, a man responsible for the deaths of untold thousands of slave laborers who were forced to toil for the Third Reich.

A Norwegian woman living in Andalusia, working as a travel writer, who agrees to help Harry Blackman manage the renovation to his newly acquired villa in La Mesita Blanca, while the Englishman handles the sale of his business and properties back in England.

With her blonde hair and blue eyes, Johansson blends in easily with the German nationals that inhabit the remote village.

She is a quick-witted, independent and strong-willed woman, but harbours a sadness born of personal tragedies, both from her childhood in occupied Norway, and a loss much more recent. Weiland tells the Spanish police that he works for the British Home Office and has come simply to assist them and to look after the interests of his fellow countryman. Inspector Garcia, a man well-versed in the machinations of men and governments is, however, far from convinced about the British man’s true motives.

You can grab the first few chapters of the book from this link, if you think it sounds interesting to you. Drop me a line if you have any questions or comments.